How crypto can accelerate climate action and scientific discoveries 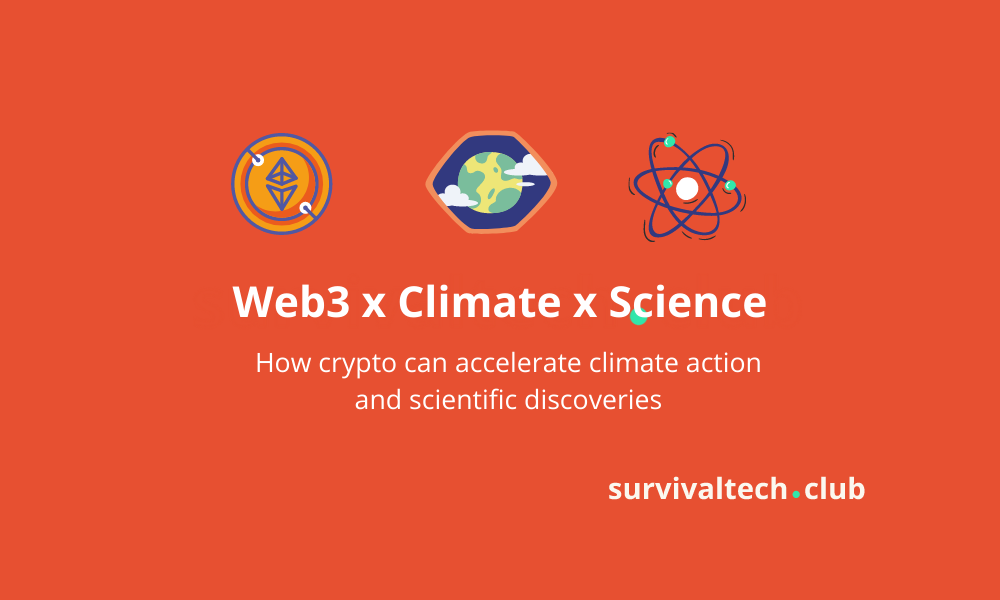 It’s Pauliina here. Today, I welcome you to go down the rabbit hole to the world of Web3 x Climate x Science with me. Ready? Let’s go.

No doubt about it. There has been a LOT happening recently in Web3.

I hadn’t been paying much attention to the Web3 space before last August. I had never felt overly enthusiastic about Web3, as I felt that crypto projects were just a mechanism trying to make money as fast as possible. I longed for a greater mission.

Last August, something happened. I interviewed Merit Valdsalu, CEO and Co-Founder of Single.Earth at Survivaltech.club. It was the first time I heard someone building a deeply mission-driven business in crypto. Single.Earth’s mission of preserving forests and their biodiversity with the help of blockchain resonated.

Since then, I’ve been excited to have discovered other companies and projects in Web3 on a mission to tackle climate change and biodiversity loss. I even ended up joining The Eden DAO as a contributor! I’ve also encountered crypto projects aiming to accelerate scientific discovery and grant open access for scientific research. Isn’t that exciting!

Web3 is a new paradigm in the world of internet. It revolves around decentralization; decentralization of computing and ownership. In Web3, users own their data, instead of corporates like Google and Meta. Blockchain is the key technology making this transition possible.

As there are more knowledgeable people about Web3 out there, I leave teaching to them. I’ve gathered below the best resources that I’ve been using to learn and make sense about the Web3 world⬇️

Time to turn to Web3 x Climate or ReFi (=Regenerative Finance) as the emerging community refers to it.

Klima DAO set the stage during Q4 2021, when it launched KLIMA, the carbon-backed currency. Since last October, KlimaDAO has locked 14 million BCT to its reserve (1 BCT = 1 ton of verified reduced/removed CO2).

Klima DAO aims to drive the appreciation of carbon assets higher by purchasing carbon credits. They have seemed to be somewhat successful with regard to this goal. S&P Global Platts reported that the recent sharp spike in renewable energy credit prices was primarily due to the Klima DAO’s large-scale purchases of renewable credits.

We are also witnessing many new projects. This directory lists all the projects in the crypto x climate space. Furthermore, the recent Gitcoin Grants Round 12 (GR12) was filled with exciting and high-quality projects.

In addition, a community is starting to form around ReFi. jΞ recently hosted a series of ReFi community calls at Twitter Spaces and is now facilitating ReFi Spring 2022 event series.

To make sense of this growing Web3 x Climate space with numerous projects, I identified three key mechanisms of how Web3 is currently tackling climate change. I’ll showcase some projects under these categories that I find the most interesting.

This first mechanism is about bridging the real world with Web3. Climate change is a real-world problem on a molecular level, while Web3 operates in the digital world with digital assets.

Many of the first projects have approached bringing together these two worlds with the help of carbon credits. To learn more about carbon credits, check out Compensate’s whitepaper.

Some companies are enhancing on-chain carbon credits with biodiversity and ecosystem health measures. For example, Single.Earth includes biodiversity measures in addition to carbon in their MERIT token. (More about Singe.Earth at Survivaltech.club’s interview with Merit Valdsalu, CEO and Co-Founder of Single.Earth). On the other hand, Regen Network incorporates ecological and social co-benefits, such as soil health, ecosystem health, and animal welfare, to its CarbonPlus credit.

Yesterday, Toucan Protocol mentioned on Twitter that they are also working on releasing another environmental asset on-chain.

2. Increasing trust in the carbon market

The second mechanism is about creating trust and transparency in the carbon market. It is noteworthy to mention that Web3 projects focus on the voluntary carbon markets, where companies and individuals purchase carbon credits.

The voluntary carbon markets have suffered from several problems. One of the major problems is double-counting, where the actual reduction or removal of greenhouse gases is counted twice or even more for the same credit.

“Crypto is very well-positioned to improve footprint and offsetting solutions by being able to verify, time-stamp and credit the projects and programs on-chain to make sure they actually reflect real climate benefits and are not double-sold.” - Martin Krag, Principal at byFounders

Some of the marketplaces increase transparency by additional measures. For example, both Single.Earth and Open Forest Protocol use satellite data to monitor the forests where the carbon credits originate.

The third method is about pooling capital and using it towards tackling climate change and biodiversity loss.

KlimaDAO is another notable DAO that has pooled capital towards a joint mission. As noted earlier, KlimaDAO purchases tokenized carbon credits and aims to increase the appreciation of carbon credits in this way. As KlimaDAO’s name suggests, it has organized itself as a DAO. This means that its members (=holders of KLIMA token) hold power to vote on the governance of KlimaDAO’s treasury and the DAO’s roadmap ahead.

Whalez is a limited NFT collection that funds projects removing plastic from the ocean. What’s interesting about Whalez is that Diatom DAO governs it. Read more about Diatom DAO here.

The Eden DAO’s mission has so far resonated the most with me. Last summer, I explored the carbon dioxide removal (CDR) space at Survivaltech.club’s article and found out that our humankind needs to scale up the annual carbon removal to 10 Gt of CO2e by 2050 and to 20 Gt of CO2e by 2100. That’s why I also joined this DAO and am excited to contribute to it!

“Crypto's biggest opportunity in climate is if it can help spur a massive capital inflow into long-term projects that have the potential to invent breakthrough solutions tackling the hardest-to-avoid carbon emission, such as fuel combustion from heavy industries, shipping, and aviation.“ - Martin Krag, Principal at byFounders.

Yes, and we need to address it.

While Patch already offers carbon removal services for crypto, the long-term and most impactful change will occur once the underlying validation method of different protocols is changed from Proof-of-Work to Proof-of-Stake.

Crypto Climate Accord is spearheading the decarbonization of the cryptocurrency industry.

Overall, when judging a particular crypto project’s energy consumption, assessing what the project has achieved with that energy makes sense. If the net value is positive and we have, for example, enabled a new carbon removal technology to see the daylight by funding it with the help of crypto, I’d even encourage for the energy consumption.

Survivaltech.club wouldn’t be it without science! While I have spent most of my time exploring the Web3 x Climate space, I also want to highlight some exciting projects in Web3 x Science or DeSci (=Decentralized Science) as people generally call it.

In August 2021, the first IP-NFT was transferred and funded on-chain. The funding was provided by VitaDAO, a collective funding longevity research, to longevity research group at Scheibye-Knudsen lab at the University of Copenhagen. Love it.

To learn more about Molecule I can highly recommend Molecule’s blog, which is full of informative articles.

While Molecule currently focuses on drug development, I couldn’t help thinking about what Molecule’s elegant solution could offer for research on climate solutions. This could be exciting!

As briefly mentioned already, VitaDAO is a community-owned collective that funds longevity research. It consists of over 3000 members and is a widely active community making real-world impact.

OpenAccessDAO is on a mission to make scientific information open for everyone. Currently, most scientific articles are behind paywalls that only a few publishers control. This has lead to a series of problems.

OpenAccessDAO started with the aim of pooling money to acquire publishers and make scientific articles open access. As far as I know, the DAO is now exploring also other options to accelerate make science open access.

LabDAO aims to build an open, community-owned network of laboratories for biomedical research. This is a project that I’ll definitely keep an eye on.

Web3 is an exciting place filled with climate- and science-related projects.

While Web3 doesn’t directly provide our humankind with novel climate solutions and save us from climate change, it definitely plays a role in it.

Web3 can support climate action and accelerate the rate of scientific discoveries for climate solutions. Web3 is full of energy, optimism, and collaborative work. And that’s what we need to tackle the climate crisis as humankind.

If you are intrigued to go down the rabbit hole, I encourage you to do so! The best way to learn about Web3 is to be brave and join a bunch of Discord channels and be active and talk to lots of people in Web3 already.

Huge thanks to Martin Krag for sharing his insights on Web3 x Climate!

If you liked this article, share it with your friends!💚