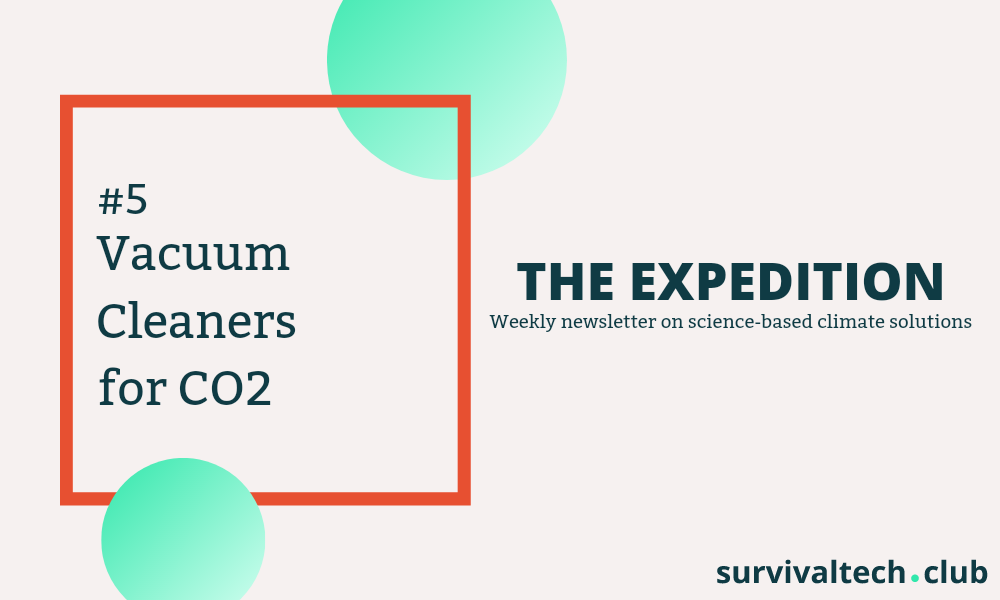 My week has been full of learning more about Carbon Dioxide Removal (CDR)!

After reading extensively about CDR and drawing several diagrams, I began understanding CDR and its steps on a more detailed level. Furthemore, I took a more detailed look on the actual biological and chemical processes to take CO2 out of the atmosphere (You can think of these processes as vacuum cleaners for CO2!).

I’m excited to share the learnings! We’ll start by forming clarity around CDR. Then, we’ll dive into the biological and chemical processes to take CO2 out from the atmosphere!

If you haven’t yet read last week’s introduction to CDR, I recommend doing it before diving into this article :)

When talking about CDR, it is essential to distinguish between at least the following three steps:

For the sake of clarity, I am not using specific terms for these steps of CDR. Most used terms are still ambiguous... Instead, I gave a description to each step to illustrate what’s happening.

1. Taking CO2 out from the atmosphere

First, the CO2 has to be collected from the atmosphere. Biological processes doing this, most notably photosynthesis. Also, chemical processes like carbon mineralization are capturing CO2.

This step seems to be called interchangeably carbon removal and carbon capture.

Second, the captured CO2 must be stored somewhere where it cannot escape back to the atmosphere for a long-time. Photosynthesis stores the carbon into biomass (trees, algae etc.) and carbon mineralization into stable carbonates. Alternatively, the collected CO2 can be injected deep underground into geoformations.

This step is called carbon sequestration or carbon storage in literature and media.

3. Making useful things out of the CO2

Thirdly, the CO2 can be further turned into useful products that have an economic value. Examples of these are building materials, fuels, chemicals, and other carbon entailing products.

The caveat in making products out of CO2 is that some products store carbon only for the short-term. For example, when synthetic fuels made out of captured CO2 are combusted, the CO2 is released back to the atmosphere.

This step is called carbon-to-value, C2V, and carbontech.

The following diagram is my attempt to summarize these insights.

This diagram is still a work-in-progress, so if you identify any mistakes or have other comments, I’d greatly appreciate for letting me know of those (pauliina@survivaltech.club)!

Now let’s have a look at the first vertical of the diagram “Taking CO2 out from the atmosphere”.

I like to think of these as different kinds of vacuum cleaners that can suck the CO2 out of the atmosphere.

Based on my research so far, there are four main underlying methods to take carbon dioxide out from the atmosphere:

We can thank photosynthesis and photosynthetic plants and organisms for our lives on Earth.

Photosynthetic plants and organisms do photosynthesis and convert light energy into chemical energy (carbohydrates like sugars). They take in carbon dioxide and water and turn it into carbohydrates.

Oxygen is the by-product of photosynthesis - the one that enables the lives of our Homo Sapiens species and of many other oxygen-inhaling species on this planet!

In photosynthesis, carbon becomes fixed into sugars and can be used to build further molecules that the plant needs to survive.

If you want to take a deeper look into this complex and amazing process called photosynthesis, check out this Khan Academy article on photosynthesis.

Also, CrashCourse has a great video on photosynthesis.

This week, I also came across interesting groups of microbes that cannot undergo photosynthesis - chemolithotrophs and electrotrophs. Instead they can do other awesome things!

Chemolithotrophs obtain their energy from reacting with inorganic  compounds, like hydrogen, hydrogen sulfide, and reduced metals. In chemistry, inorganic compounds mean compounds that simply have no carbon atoms.

Chemolithotrophs can be used to make fuels. LanzaTech is operating in this field and making low-carbon fuels with acetogens, a subset of chemolithotrophs.

Want to dig deeper into chemolithotrophs? Check out this article by Oregon State University.

There are currently two basic methods of doing (DAC):

When talking about DAC, it is important also to distinguish whether the carbon dioxide has been captured really from the air or from flue gases of, e.g. fossil fuel power plants.

There is a major difference in the concentration of carbon dioxide between the atmosphere and flue gases.

As we learnt in The Expedition #2, CO2 makes up only 0.04% of our atmospheric gases. In contrast, flue gases have a CO2 concentration of around 8-10% making it relatively much easier to capture the carbon dioxide.

If the carbon dioxide is captured from flue gases, it is called “point-source capture”. This type of process is typically referred to as Carbon Capture and Storage (CCS) in literature and media.

Carbon mineralization occurs naturally in silicate materials (such as olivine, serpentine, and wollastonite) and rocks rich in calcium and magnesium (such as peridotite).

Carbon mineralization is a chemical reaction where CO2 reacts with these rocks and minerals and forms stable carbonates. The CO2 gets “trapped”.

Some exciting startups that I’ve been following in the field of carbon mineralization are Heirloom, Carbfix, and CarbonCure.

Read more about carbon mineralization by The National Academies of Sciences, and Engineering, and Medicine here.

I hope you learnt a ton from this Expedition! I know that there might be a lot to digest... But don’t worry, we’ll return to these topics in the upcoming weeks :)

Which topic discussed in this newsletter would you like me to explore next? Other Feedback or ideas? Email me at pauliina@survivaltech.club.

If you haven't yet subscribed, make sure to do so below and you won't miss any learnings!

Until next week! Midsummer is next week, yay!