Investing in science and hardware startups 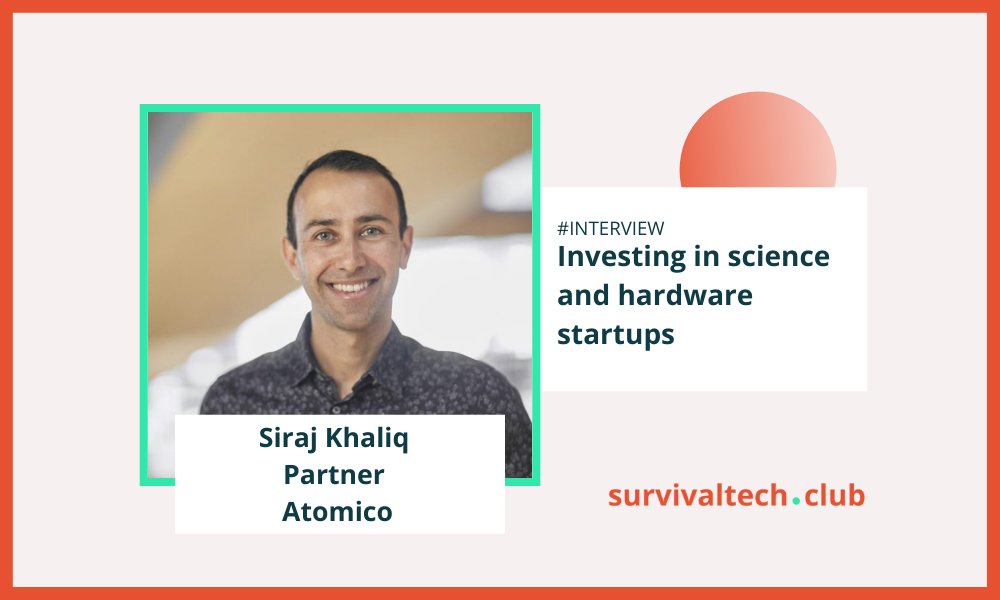 It is my pleasure to introduce you to Siraj Khaliq, Partner (Frontier Technologies) at Atomico. Siraj is inarguably one of the key deep tech investors and has a unique background as computer scientist, early Google employee, and as Co-Founder of The Climate Corporation.

Before we delve into the interview, I want to say few words about this newsletter’s publishing schedule.

I am lucky to currently have two amazing customers at my consultancy. However, it feels that also publishing an information-packed newsletter on a weekly basis adds a bit too much stress. Therefore, I’ll continue to publish this newsletter on Thursdays but with a less strict schedule. I hope you all understand🙏

Atomico, founded in 2006, is one of the leading VCs globally. It has an impressive track record of investments into European unicorns, such as Supercell, Spotify, Graphcore and Lilium, and continues to back forward-looking founders with its fifth fund.

In February 2020, Atomico raised its $820M fund, “Atomico V” and now has assets under management worth $2.7B. Atomico generally invests in series A and beyond. [Wondering what series A means? Read more here].

Over the last five years, Atomico has notably been one of the biggest European proponents of deep tech / hard science startups. Siraj Khaliq has been one of key people behind these “frontier tech” companies.

Some of the biggest names he has been involved in funding include:

What’s your background that led you to investing in frontier technologies?

My investing is heavily coloured by my background as a computer scientist and entrepreneur.

This journey started when I was introduced to Sergey Brin (one of the Google founders) while studying computer science at Stanford. It was 2001, and he convinced me to join their loss-making little startup, at a time when it was not much more than a search engine. Over the subsequent five years I was there, Google went through a 30x growth in headcount, multiple product launches and an IPO. It was a magical period in that company’s history and an incredible place for many of us young, idealistic engineers.

In 2006, it just felt like the right time to start something new. I left alongside another ex-Googler, David Friedberg, and together we founded The Climate Corporation. I was the technical co-founder, David the business co-founder.

We used our big data skillset - rare at the time - to build a state of the art prediction model for crop yield. Initially used for an insurance product, we later used the model to help farmers make better decisions and drive yields higher. This became the flagship product that led to an acquisition by Monsanto/Bayer. It remains the front-running platform in digital agriculture today.

This was perhaps one of the first useful AI models built outside of advertising and movie/music recommender systems. I think investors in those early days probably found us quite amusing… what would a couple of engineers know about agriculture? They were right about that, but luckily we were foolhardy enough to keep on going.

What’s your take on VCs and their investments in hardware companies?

Early venture capital was all about semiconductors and hardware - think Arthur Rock and the Fairchild Semiconductor team back in the 60s. As the high capital efficiency of software plays became apparent, hardware fell out of fashion, and investors turned elsewhere, seeing better returns on investments in software.

With software, the legend is that you can build something in your garage over the weekend and launch it. Costs are low and margins high.

A sizable fraction of VCs (although not enough) now realize that hardware is not such a bad thing. A startup can nowadays outsource a lot of the complex pieces of development, testing and manufacturing. You can be fairly capex light. Furthermore, these startups often have novel IP and are hard to compete with their unique skill sets and head start.

We continue to need more “bold” capital to back hardware / hard science companies. Solving the world’s biggest problems, such as climate change will require it.

You’ve supported many science and hardware companies. What are the greatest pitfalls for these kinds of companies? How could entrepreneurs avoid them?

Firstly, many science-based startups fall victim to hubris and over-optimism. Scientists might believe their hardest work is behind them and commercializing is the easy bit. But there is a huge difference between early success in a lab and productionization. Plan things to take twice as long and to cost three times more money. Design your fundraising strategy accordingly and don’t be so dilution sensitive you run out of capital before delivering meaningful results.

Secondly, team members coming out of a science background often have an R&D mindset instead of a delivery mindset. There are some very impressive people coming out of science and academia, and with them, you have to make sure to push forward schedules to make it more than an ongoing science project. I’ve heard numerous times from scientists that “we're scientists and we can't do sprints or agile development”. Yes, you can. You need to figure out how you break innovation down into smaller, reportable chunks.

Third, a startup needs a diverse culture and people from various backgrounds. Otherwise, you are going to have everyone stuck in the same groupthink and possibly go down costly dead-end tunnels that could have been avoided. At Climate, we were very fortunate in terms of team diversity. I don’t just mean gender and cultural diversity (which are important and could have been better), but also diversity in terms of disciplines. We had neuroscientists and ex-NASA engineers working side by side. People bring very different intuitions to tackling the same problem when they come from different backgrounds.

What’s the role of quantum computing and AI in tackling climate change?

AI and quantum computing could prove absolutely fundamental in solving some of the world's biggest problems, including climate change.

Solutions to some of these problems involve hard science and chemistry simulations, modelling physics, including quantum effects and non-determinism. You can run these simulations traditionally but at some point, you hit a limit in terms of scale. That's where new computing technology is critical, both AI/ML and quantum computing included.

A great example is the new version of AlphaFold open sourced by DeepMind recently. [AlphaFold solved the 50-year old protein folding problem with AI]. To many this was a fundamental breakthrough. I started out my career in protein folding on a research project at Stanford called Folding@Home, where we were predicting protein folding times. That was hard enough - some thought that predicting structure was not going to be possible in our lifetimes.

Quantum computers are great at solving huge optimizations - problems that are so huge they would require a completely infeasible amount of compute power using the “classical” computers available today. Quantum computers turn these exponentially complex problems into linear problems, suddenly making them tractable. When it comes to designing new chemistry, from battery technology to carbon sequestration, this is likely the only way.

What are the best ways for a person to learn new things?

Obviously, you're learning your whole life as long as you remain open to learning. My advice to people starting in the industry is to combine curiosity with humility (it’s easy to lose the latter when one is allocating large sums of money), and try to listen more than you talk…  otherwise you might never create the space to hear a key insight the other party might share.

Taking time to reflect is also key. At some point, as a founder, I was jumping from one fire to the next, trying to put it out and not taking time to step back. So one of the key pieces of advice that I now share with my reports or mentees is to carve out time during the week to introspect.

Finally, cultivate a bias towards action rather than being a perfectionist and trying to evaluate things from every angle before proceeding (perhaps this is a particular problem for former engineers like myself). When it comes to startups, and indeed investing, you learn by doing - so go out and experiment based on your educated guesses. If you fail, that’s fine. Go on to the next thing and perhaps the thing after that until you find a formula that works.

What advice would you give to future climate tech founders?

The problems in climate tech may seem so vast that it’s easy to think that you can't do anything about it. But an apt analogy is that of climbing a daunting mountain. You may look at the mountain and think: “How could I ever get up that?” and before long you’re overwhelmed. But if you start taking those first steps and keep going - one foot in front of the other in the right direction - there’s a good chance you eventually get to the summit.

In building a climate tech company, also take a few steps at a time and hold on to your self-confidence and sense of purpose. There are few missions that are as noble, which can only be highly motivating to you and your team.

There's never been a more urgent time to tackle climate change, but luckily neither has there ever been a better time to raise money to do so. When my-cofounder and I were out raising for The Climate Corporation, we went up and down Sand Hill Road in the Valley, cap in hand, asking for funding. Now it’s the other way around… VCs are holding the cap asking humbly to be allowed to invest for ownership. Take advantage of this dynamic - it won’t last forever!

I hope you learnt as much from Siraj as I did! If you enjoyed this post, make sure to spread the word about Survivaltech.club to your friends!

With warm greetings from Barcelona airport,