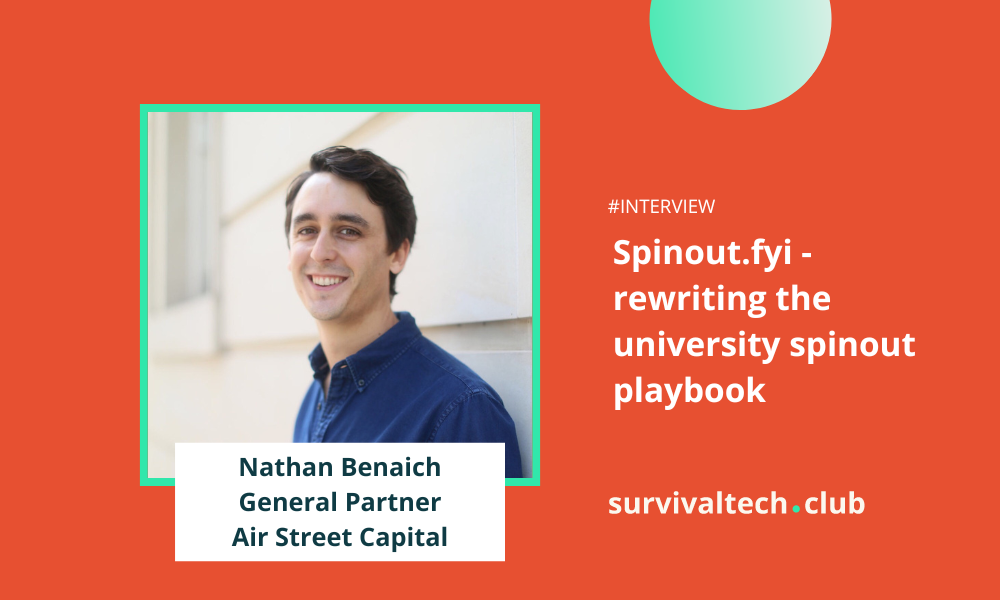 Nathan is on a mission to improve the university spinout ecosystem, particularly in Europe, to support the creation of more science-based companies.

In this interview, Nathan sheds light on what made him initiate Spinout.fyi and why Europe is lagging behind in science commercialization. We’ll also go through the key findings of Spinout.fyi’s recently released university spinout database, and three things that need to change in the university spinout ecosystem.

An effective university spinout process is crucial in enabling the fast implementation of innovations for climate and humankind’s survival.

🧪A word on university spinouts

Before introducing Spinout.fyi and hearing more from Nathan, let’s start with a brief introduction to university spinouts.

Researchers make incredible inventions in universities and research institutions. Sometimes these innovations and the related IP have commercial value. In this case, the IP can be sold or licensed to an existing company. Alternatively, the innovation and its IP to be “spun out” into a new company from the university. This is called a university spinout.

Spinout.fyi is the open database for university spinouts.

It aims to bring transparency to spinout deals and catalyze a re-write of the spinout playbook in favor of future founders. It crowdsources and publishes university spinout deal terms.

In June 2022, Spinout.fyi published the crowdsourced university spinout database, and Nathan wrote the first analysis of the data. The database is the largest of its kind, with 143 entries from 71 universities worldwide.

➡️Have you created a university spinout? Contribute to the Spinout.fyi database by taking the survey here.

➡️Find the analysis here. (We’ll go through some of that in this Survivaltech.club article)

Spinout.fyi is an open-source initiative of Air Street Capital.

What made you start Spinout.fyi?

Spinouts hold the biggest untapped opportunity in startups. SaaS is overly competitive and priced to perfection.

Europe has many world-leading universities and research institutions. It should be the hotbed for spinout creation, but it isn’t. Europe is behind in research commercialization. This needs to be changed.

In May 2021, I wrote an essay on the topic titled “Rewriting the Europen spinout playbook”, and Financial Times published my oped “Universities in the UK and Europe have a start-up problem”. This is also when Spinout.fyi was born, aiming to spearhead the change for better university spinouts.

Why is Europe behind in science commercialization?

Three key areas are holding back the potential of European university spinouts.

European universities tend to be short-term greedy instead of long-term greedy. They fear letting “the golden goose” off with a too friendly deal and not profiting from it as much as they could have had.

The short-term greediness also prevents universities to view spinouts as a way of creating wealthy, happy alumni who would evangelize and financially support their universities later (e.g. donations).

The TTO industry takes the view that every deal is unique and therefore implementing open standards doesn’t make sense. As a result, doing a deal takes a lot of time and effort and creates an uneven playing field for the scientists who too often enter negotiations with their TTO, not knowing what to expect.

3. Making it hard for academics to take a leave of absence

You published the amazing open-source Spinout.fyi database and the first data analysis on university spinouts in June 2022. What were your key findings?

1. Founders are unhappy about the spinout process

66% of spinout deals take longer than 6 months to complete, and 27% more than a year. For reference, raising a startup seed round typically takes 3 months.

Universities took a 12.8% equity stake in spinouts on average. However, this hides significant geographical disparities.

3. Royalties are not a thing of the past

Royalties were part of the spinout deal in 45% of the cases.

4. The success of a spinout is not only dependent on the founding IP

In 77% of the cases, the spinout was clearly founded around IP that was developed at the university. However, one-third of the founders said that their company is not depending on the original IP today.

Thus, the justification for aggressive spinout deal terms can quickly become obsolete. The ability to execute may matter more than its founding IP in how successful a spinout is.

What should be done to address these problems concerning university spinouts?

We need a hard reset to the university spinout playbook.

The goal of spinouts is to create value for the world by commercializing new inventions developed in an academic environment. Now, also universities and their funders need to start supporting this by adopting a long-term view.

Firstly, we need to clarify how spinouts are done. We should create standards for university spinous with precise steps, timelines, service level agreements (SLAs), and terms. Markets are efficient when there is information and predictability.

Secondly, we should champion the entrepreneur. The more successful founders become and the more universities enable their success, the more willing they will be to pay it forward to future generations. This means making, for example, alumni donations.

Thirdly, universities and their TTOs should not focus on making short-term money. TTOs are notoriously not a great business and essentially cover their cost base. What moves the needle is donations and having large companies generating significant revenues and employment in Europe. Enjoying the support of alumni will be crucial in this, as happy alumni will donate for and evangelize about their university.

👩‍💻I’m looking for a project for my climate tech consultancy! I focus on business development projects for deep tech climate startups, investors, and research institutions. Find out more on my consultancy’s website. If you have a project where I could help, message pauliina@survivaltech.club and let’s talk!

✨Carbo Culture, a carbon removal startup, is hosting the Carbon Removal Afterwork next Wednesday, August 24, 5-7pm in Helsinki, Finland! If you are interested, message Charlotta Liukas for more details.

🔬I listed the 11 best programs, fellowships, and venture studios for scientists and entrepreneurs who want to build a deep tech climate startup. Find these resources also on the Survivaltech.club website.

As always, I am more than happy to hear feedback and connect with fellow climate people at pauliina@survivaltech.club.

If you liked this article, please share it with your climate friends!🌍