Preserving the world’s forests with cryptos 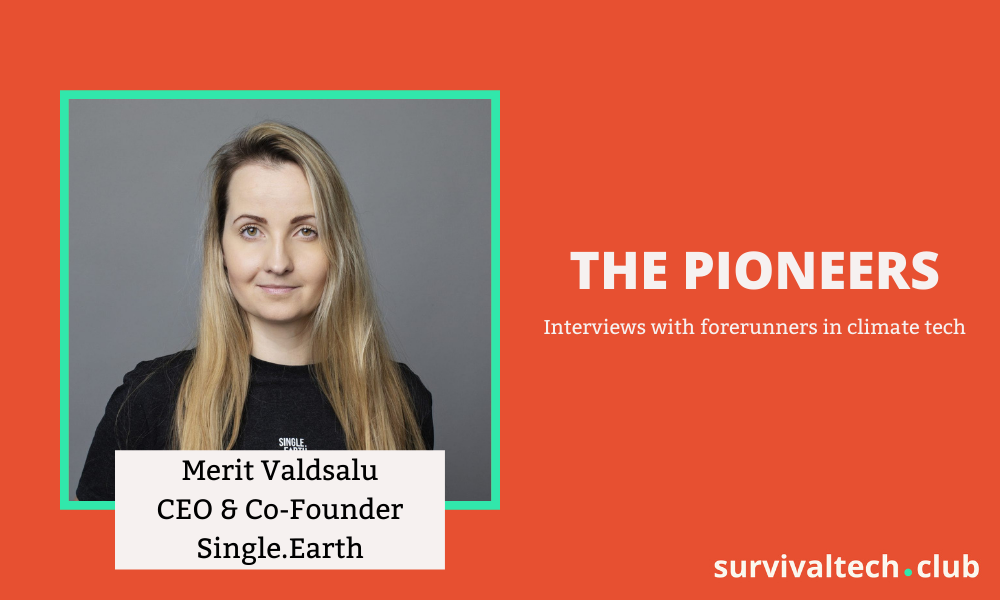 The new IPCC report released on Monday was a grim read. So there’s no better way forward than focusing on the solutions!

Welcome to issue #4 of The Pioneers interview series that meets the most phenomenal founders and investors in climate tech.

This week, I had a chat with the fantastic Merit Valdsalu, Co-Founder and CEO of an Estonian startup Single.Earth. Single.Earth is building a transparent and accessible carbon credit marketplace with cryptos.

Single.Earth just raised a $7.9M round led by EQT Ventures. Huge congrats Merit and the team!

We talked with Merit about the founding story of Single.Earth, the current problems of the carbon credit market, how Single.Earth’s blockchain- and data-based solution is solving them,  and her advice to future climate tech founders.

Before diving in I recommend reading the last week’s newsletter on forests - The Expedition #8: Forest - the ultimate survival tech. Preserving forests is crucial for our humankind’s survival.

Get ready for some serious awesomeness!

We humans have cut down one third of the world’s trees over the last 10,000 years. That's 2 billion hectares of forest lost - twice the size of the United States.

Although the rate of deforestation has decreased during the last decades, we still chopped down 420 million hectares of forest 1990-2020.

The problem with deforestation is multi-folded. Firstly, we cut down our natural carbon capture plants, the trees. Secondly, we destroy the homes of many plant and animal species and cause biodiversity loss.

The problem that Single.Earth is tackling

The best thing that we can do is to preserve the still intact forests as they are.

One solution for accelerating the preservation of forests is financial incentives.

This is already done in the carbon market. The landowner can get carbon credits released the amount corresponding to the preserved forest and sequestered CO2. Thus, carbon credits are an alternative to logging as income.

However, the carbon credit market has some severe limitations that are limiting its growth and efficacy in tackling climate change.

Firstly, there is a lack of transparency on the market, which allows the system’s exploitation (e.g., double-counting). Secondly, the market is still inaccessible for most landowners due to the complicated, long, and expensive certification process.

Single.Earth is an Estonian startup building a transparent and accessible carbon marketplace with cryptos.

Single.Earth has created a marketplace that allows landowners to access carbon credit markets easily and have a viable alternative to logging as income generation.

Every landowner who registers on Single.Earth’s marketplace will get issued one MERIT token for 100kg of sequestered CO2 by her/his forest. The landowner can then sell this MERIT token to buyers (investors, companies, individuals) at the marketplace.

To ensure full transparency, Single.Earth has built its marketplace on blockchain. As a result, the origin of each MERIT token can be tracked down to the exact forest that allowed issuing that token.

How does your journey to founding Single.Earth look?

My background is at Pipedrive. At Pipedrive, I led localization and was responsible for ensuring that the product is usable in new markets with different languages and cultures.

Back then, I was also participating in many startup events. One of them was the Future of Wood 48-hour hackathon organized by Garage 48. My now Co-Founder, Andrus Aaslaid, and I participated in the hackathon with a very local problem in mind: the intensive forestry industry.

Here in Estonia, there was a lot of talk about forestry industry logging too much wood. However, landowners didn’t have another viable option other than logging for income generation.

We asked ourselves: how can we monetize nature as it is without having to destroy it?

We created our initial solution around this question in the hackathon and won it, to our surprise! After that, the idea lifted off, and we then participated in several accelerator programs including Climate-KIC.

What problems does the carbon market have?

One major problem is that the current carbon market is not accessible to most landowners.

1. The process of getting certified is complicated.

It requires the landowner to know a lot about the ecological value of the land, and there’s usually a considerable knowledge gap.

2. It is expensive for the landowner to get the certificate.

Furthermore, the process has many middlemen and leaves the landowner with a small fraction of the money transferred.

3. The process takes a long time.

It can take months to go through the process.

All these issues mean that landowners don’t still, in practice, have an alternative to logging.

Another major problem of the carbon market is the lack of transparency. This allows the system’s exploitation, for example, double-counting, to occur. At worst, it leads to an increase in CO2 emissions.

How are you solving these problems of the carbon market?

The first problem (poor accessibility) we tackle by providing an easy way for landowners to participate in the carbon market.

When a landowner registers, we automatically evaluate the forest’s ecological value (CO2 sequestered and biodiversity). We do this with the help of our global carbon and biodiversity model.

We call this model the Digital Twin. It’s a dynamic model based on satellite imagery, big data analysis, and machine learning. We can also integrate landowners’ data like soil samples into it.

For every 100kg of sequestered CO2 with a biodiverse forest, the landowner gets one MERIT token. The landowner can then sell the MERIT token at our marketplace to companies, individuals, or investors.

The second problem (lack of transparency), we tackle by using blockchain in our solution.

It makes our solution extremely transparent and traceable. Although it doesn't immediately fix the problems in the other marketplaces, we believe that eventually, all carbon marketplaces will move to blockchain.

While the carbon markets focus on CO2, we also want to include biodiversity measures in our marketplace. As a buyer of a MERIT token, you get information about that particular forest’s biodiversity in addition to the amount of CO2 sequestered.

Are you building Single.Earth on an existing crypto platform like Ethereum or developing an own platform on blockchain?

We are currently testing different approaches in parallel to find the best match. At this early stage, many things can go right or wrong.

One very exciting thing with cryptos is that the crypto market is looking for assets that are connected to the real world.

Could Single.Earth be extended to oceans as well?

We have been thinking about it from the very beginning. The tricky part is that the sea has no owners like land has. As a consequence, nobody is responsible for what happens there.

Nevertheless, I remain optimistic. The lack of ownership in oceans is just a technicality that we need to figure out how to go about.

If you want to better understand the environmental problems related to oceans and fishing, I recommend watching the Seaspiracy-documentary.

What other documentaries could you recommend?

I’d recommend David Attenborough’s document A Life on Our Planet.

In parallel to climate change, we need to tackle biodiversity loss. It is an existential threat to all of us on this planet. (For more information, check out the recently published “Biodiversity and climate change”- workshop report by IPBES and IPCC)

What would your advice be to current or future climate tech startup founders?

The opportunities are enormous in climate tech. So many things that are wrong right now, which means that we also need many solutions to fix them all.

Furthermore, more and more investors are looking into climate tech. We have finally reached the point where financial viability is seen in sustainable ideas and sustainable innovation. This change has been relatively recent, taking place over the last year or two.

2. Surround yourself with a great network

A great network is so helpful for a founder. It’s not just your co-founders and team who are there for you to solve the problems, but also their extended networks and investors.

3. Expect things to take longer than you thought

Before founding Single.Earth, I thought you have this great idea, figure out the business plan, and then just execute it.

When you build everything from scratch, it can take a long time and many brainstorming with different people before you figure everything out.

Single.Earth is hiring! If you are passionate about preserving forests, check out the open positions or leave an open application here.

Check out Single.Earth’s presale of MERIT tokens and invest in forest preservation and biodiversity.

I wish you enjoyed the read and learnt a ton! As always, I love to hear feedback and ideas. You can send them directly to me at pauliina@survivaltech.club.