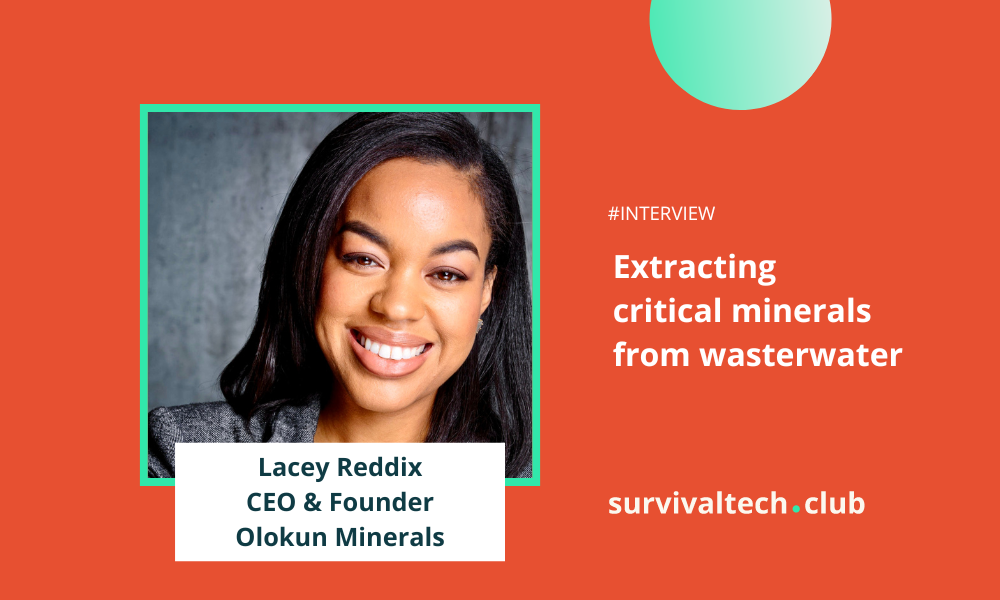 It is my pleasure to introduce you to Lacey Reddix, CEO & Founder of Olokun Minerals! Olokun Minerals is an LA-based startup extracting critical minerals, such as lithium and cobalt from wastewater in an environmentally friendly way.

Before diving into mineral extraction, I have a few exciting updates:

If you are working on a biotech-enabled climate solution / startup or know somebody I should talk to, I'd love to hear from you! pauliina@survivaltech.club.

🧪My op-ed on accelerating deeptech and hardware climate startups in Europe was published on Sifted, the leading European tech and startup media.

💚Our idea, a plug-in for Google Maps / a mapping app that shows sustainable consumption options wherever you are, was selected as one of the top three finalists at the Global Leadership Challenge, a global initiative of the University of Oxford and St Gallen Symposium.

💰Contrarian Ventures, a European climate VC, is looking for a Head of Research and Science.

💰Lowercarbon Capital, a US-based climate VC, is looking for an Associate and an Executive Assistant.

⚒️Climate Fellowship, a year-long program for building a climate startup from an idea to seed, closes applications tomorrow, December 16.

As the energy transition proceeds, the world is experiencing an increasing demand for many minerals. Producing EVs, energy storage, solar panels, and wind turbines require critical minerals such as lithium, nickel, and cobalt.

The International Energy Agency (IEA) expects the demand for lithium to grow 40x by 2040 from the 2020 demand level. Similarly, it forecasts cobalt and nickel demand to increase by 21x and 19x by 2040, respectively. These increases in critical mineral demand are remarkable and will take place in a short amount of time.

Ironically, extracting minerals critical for the energy transition has environmental and social problems.

Lithium extraction uses around 1.9 million liters (=500,000 gallons) of water for 1 ton of lithium. That’s a lot of water, even when put into context - an EV’s battery pack contains around 8kg of lithium. Furthermore, toxic chemicals, such as hydrochloric acids, are used in lithium extraction, which can leak into the environment, causing severe damage.

Cobalt mining has notoriously serious ethical problems, as human rights are being violated in the rush toward critical minerals. For example, child labor is very common in The Democratic Republic of Congo, a country with the world’s largest cobalt reserves.

We must increase the supply of critical minerals to transition from fossil fuels to renewable energy. But, this rapid increase in mineral supply has to be done responsibly.

Olokun Minerals is an LA-based startup that extracts critical minerals from wastewater in an environmentally friendly way.

Olokun Minerals is in the process of developing that extracts critical minerals like lithium, cobalt, and nickel from several brine sources. Brine is wastewater with high salt concentration and is produced in, for example, mining, geothermal, and desalination (turning fresh water into seawater).

My educational background is in civil engineering with a concentration in water resources and environmental engineering.

As importantly, I am originally from Jackson, Mississippi. Hurricane Katrina had a big impact on my last two years of high school in Jackson. After Hurricane Katrina hit the coast, we suddenly had an influx of about 100 new students who had to move out from the coast. This experience allowed me to see first hand the effects of the environment on different communities.

After working for a number of years for a commercial design-build general contractor in Northern California, I took a job as an infrastructure master plan coordinator in Jackson. Then, I worked as the watershed program manager in Atlanta. This is where my interest around rethinking water infrastructure really began.

After Jackson and Atlanta, I moved to California, which was struggling with a bad drought and the uncertainty of where they would source clean water for its growing population in the coming years. I thought desalination, making fresh water from seawater, was a way that we could help with this problem.

What are the environmental problems of desalination?

There are two main environmental problems with desalination.

Secondly, when you take out all the salts from the seawater so that you are left with fresh water, the salts have to go somewhere. Usually, the salts are placed back into the ocean, as the desalination plant operators haven’t figured out a profitable use case for the salts.

The Middle East provides a warning example of what diluting brine from desalination in the ocean could cause over time. The Middle East relies on desalination as a source of fresh water, as they don’t have much fresh water around. They are observing an increasing salinity of the Arabian/Persian Gulf and seeing the marine ecosystem being affected. Middle Eastern countries are now looking for solutions to fix this.

Are there other processes in addition to desalination that produce brine? What are these sources?

We initially looked at brine from desalination plants and aimed to find a use case for the brine. As we learned more about the process, we found out that there are many other brine sources.

Oil and gas fracking has caused a lot of new brine sources to start to occur. The fracking process uses a salty solution to break up rock and, as a result, creates a lot of wastewater that can contain valuable minerals from underground.

Which minerals are you targeting?

We are currently targeting critical minerals for the battery supply chain, as they are the most valuable. Those minerals are lithium, cobalt, and nickel. We have shown that our technology can extract all three of those.

Outside of those critical battery minerals, we are looking at potassium, calcium, and magnesium. Potassium is used to create potash, which is then used as a fertilizer for agriculture. Calcium can be turned into calcium carbonate that is often used as an aggregate for concrete in construction. Magnesium is used for aluminum and steel production.

Our long-term goal is to create supply and customer pipelines for a number of different minerals while also producing clean water.

How does your mineral extraction technology work?

Our core process is a column packed with a patented resin that can target positively charged ions within brine. We are utilizing chromatography which is a process that has been used in the pharmaceutical industry pretty heavily and even in forensics but not widely (if at all) used to separate out minerals in brines.

I was lucky to partner with a national lab in the early stages of technology development.

What advantages does your process have over conventional methods?

Let’s look first at traditional lithium extraction as an example.

Today, most lithium is extracted from underground brine. The lithium-rich brine is pumped underground into huge evaporation ponds, where the sun evaporates water from the brine leaving lithium and other minerals. [Watch a Youtube video of lithium extraction ponds in Chile’s Atacama Desert.]

Then, further processing takes place to separate lithium from other minerals. This processing usually involves many chemicals, including acids and lime to precipitate excess magnesium.

The conventional lithium mining process has a severe effect on the environment. It uses a lot of water and land. Furthermore, the chemicals used in the processing may leak into the surrounding environment causing serious damage.

We are developing a process that does not require additional chemicals and uses very little water compared to conventional methods. Our approach is also compacted, making the effect on land use minimal. Furthermore, we are tapping into mineral-rich wastewater that would otherwise be underutilized.

Companies will start to pay increasingly more attention to the environmental impact as people crack down, looking at the supply chains of their products.

2. Comparable or even lower extraction cost

This extraction method has the potential to achieve lithium separations at a comparable or even lower cost than conventional methods, but we still have improvements that need to be made to reach this aim.

We are currently still at the lab-scale. However, we aim to build a commercially viable prototype and demonstrate that we can achieve the cost levels we have modeled.

What is your business model?

Our ideal customer produces salty, mineral rich brines as a byproduct of their operations. With our service, the customer can extract metals and minerals from their briney wastewater and then sell them to the market. We are creating a potential revenue stream for these customers, making it attractive to implement.

How can Survivaltech.club readers help you?

We are looking for a process engineer to help build our next prototype. We'd love to talk to anybody who is a chemical engineer or mechanical engineer and interested in what we are building.

We are also eager to learn from potential customers. If you are working for a company that is either interested in our service or might have new ideas on utilizing our technology, I’d love to speak!

I’d love to hear feedback and connect with fellow climate people! Contact me at pauliina@survivaltech.club, Twitter, or LinkedIn.

➡️ If you found this article useful, please consider sharing it with your network!🌍 Share