Investing in tech startups to help solve the climate crisis 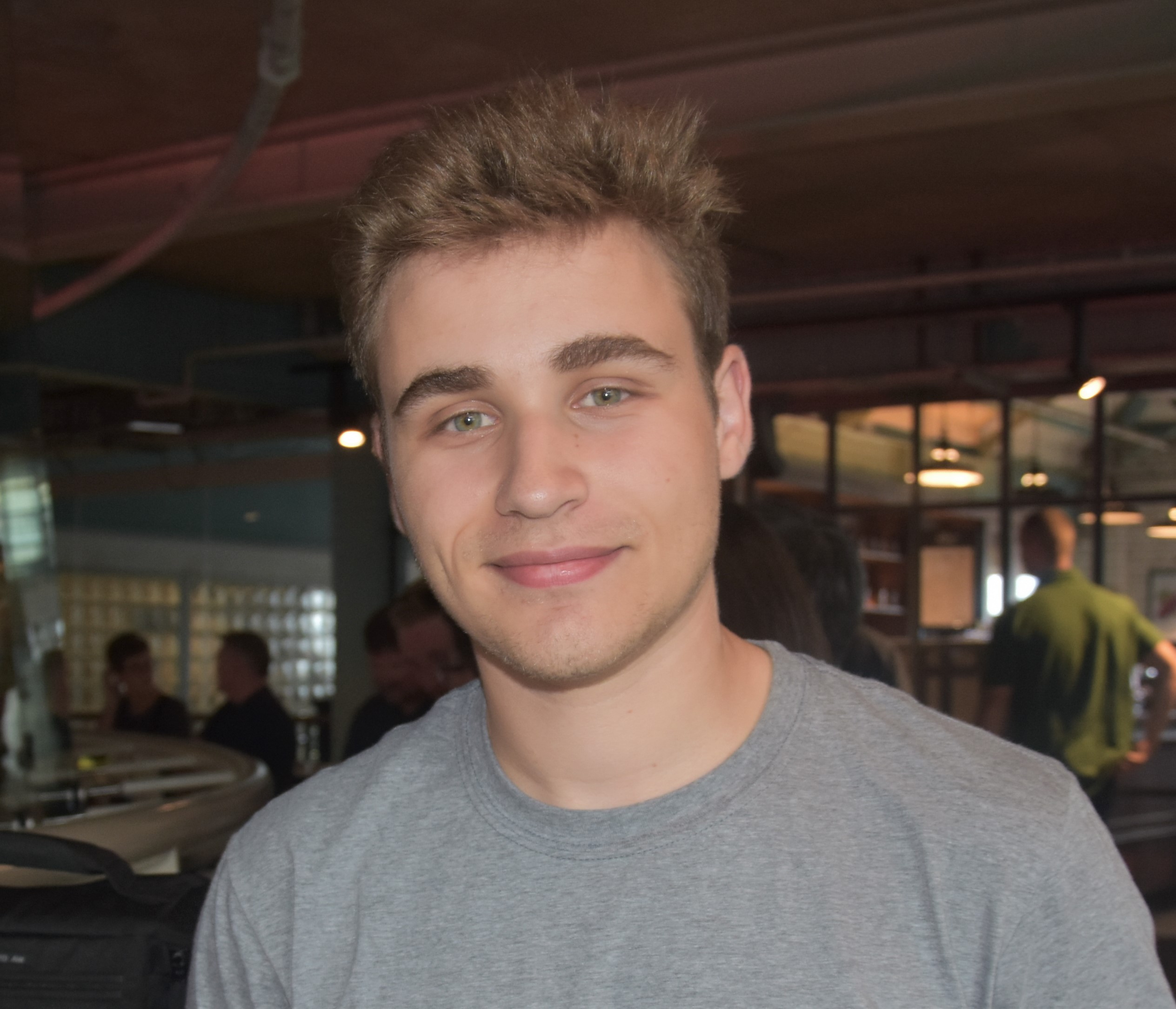 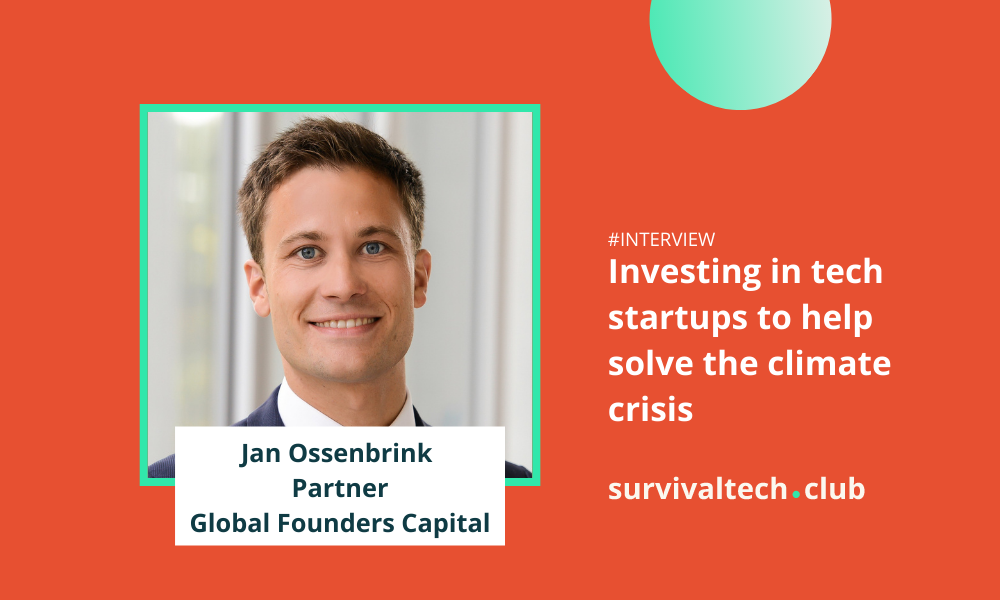 Today I introduce you to Jan Ossenbrink, Partner at Global Founders Capital (GFC). Jan is a Climate Tech investor with a background in engineering and business. He did a Ph.D. analyzing the energy transitions in Germany and California. Before joining GFC, Jan worked for McKinsey & Company, supporting clients working on clean hydrogen and electric vehicle charging infrastructure.

In the interview, you will hear about his view on the future of Climate Tech and what investors are looking for in startups tackling the climate crisis.

Before that, some news from our side! 🤩

We are holding the second community meetup, yaaay! 🌍

At the meetup, you will have the chance to meet like-minded people who care about the planet and love Climate Tech. Don’t miss the opportunity!

Register for the Community Meetup at the link below!

Let’s go on with the interview!

GFC stands for Global Founders Capital, and it is a leading global VC fund. The fund started its operations in 2013 as an initiative led by the founders of Rocket Internet, Oliver Samwer and Marc Samwer, and by Fabian Siegal, co-founder of Delivery Hero.

GFC supports founders from all over the world, is stage agnostic, and prides itself on providing operational support to portfolio startups to grow.

Let’s hear what Jan has to say about his work at GFC and Climate Tech investments. Enjoy!

How did you become a Climate Tech investor, and why do you like it?

I have been passionate about the global transition towards sustainable energy since school. By the time I retire, I hope to have made a significant contribution to this shift. After school projects on solar, batteries, and hydrogen, I decided to study electrical engineering and business administration in Aachen. Following my Master’s thesis on the evolution of wind and solar technologies that sparked my passion for research, I then had the chance to pursue a Ph.D. at ETH Zurich and Stanford. During the Ph.D. I studied the energy transitions in Germany and California from a tech, policy, and management angle. Bringing these perspectives together was very exciting because it allowed me to understand the roles different decision-makers have in the energy space and why it is so hard to reach a consensus about stringent change. Once I finished that journey, I worked as a freelance consultant for the World Bank, the United Nations, and several incumbent and new businesses. When returning to Germany, I joined McKinsey & Company to support clients working on clean hydrogen and electric vehicle charging infrastructure.

When GFC approached me and offered me the chance to play a key role in expanding the Climate Tech portfolio of the fund, I couldn’t refuse. I truly enjoy my job because it allows me to create an impact by allocating capital to the best founders in the space and supporting much-needed solutions. At the same time, I can learn from our growing global team, which includes some of the best investors and company builders you can imagine, who are deeply rooted in the world’s most vibrant innovation centers.

I love GFC because you get the freedom and trust to define your role and shape your work according to your areas of interest and ideas. I have the opportunity to realize my startup ideas by finding like-minded founders, investing in Climate Tech startups around the world, and providing hands-on support to our portfolio companies. Our global reach, entrepreneurial mindset, and high pace are additional characteristics that make GFC unique.

Among others, Bill Gates and Larry Fink argue that the future’s largest companies will be in Climate Tech. Do you agree and why?

I agree, even though I would soften the statement from “will” to “may”, because a) the future is never certain and b) this future will not happen automatically. I think the chances have increased significantly after the Paris Agreement in 2015 because leaders worldwide are realizing that the majority of the people genuinely want to stop climate change. They want to avoid its adverse effects on the natural environment, their own lives, and the livelihood of future generations. They also understand that we need to listen to the scientific community, which tells us we need to reach net-zero emissions by 2050. More and more people are beginning to realize that we need to rethink and rebuild a significant share of the global economy to do that. The level of required change is unprecedented, and the longer we wait, the faster we need to be later on. As the underlying issues are global and the stakes are high, I believe that Climate Tech will offer tremendous business opportunities to be seized by the brightest and fastest moving problem solvers.

The influx of public and private capital and talent into Climate Tech solutions in the last 18 months tells me that the world is finally moving ahead in areas that we should have started promoting 20 years ago, according to the scientific community's recommendations.

We also start to see the first success cases that confirm that Climate Tech represents one of the biggest business opportunities of this decade and this century. Take Tesla, whose market capitalization is currently worth approximately as much as the next ten most valuable global automakers combined. If you assume that the stock market provides an indication of the common belief of a company’s prospects, the interest in Tesla stock is a strong signal that the technological tides in passenger cars are turning away from internal combustion engines and towards battery-electric vehicles. It also shows that on a business model level, being positioned as an integrated software & energy company is seen as far more promising than playing a traditional automotive OEM game. However, incumbents that overcome such legacies and embrace the necessary change may soon be considered Climate Tech companies, too; take Volkswagen as an example.

What are nowadays the biggest obstacles that Climate Tech startups face?

Obviously, a Climate Tech startup is no different than any other business endeavor: even making no mistakes, building up any successful venture is really, really hard. Climate Tech may be particularly challenging because many of the meaningful solutions tackle complex and tech-heavy problems in business environments where you need to compete against mature, low-cost alternatives, from powerful incumbents that benefit from the existing infrastructure as well as the current institutional environment. It’s hard for a startup to organize a paradigm change and overcome lock-ins that have emerged over decades.

This is particularly true for Climate Tech startups trying to develop technologies that have a sizable impact on a) preventing additional greenhouse gases from being emitted to the atmosphere and b) reducing the amount of greenhouse gases we have already emitted. In fact, all of these companies have asset-heavy and thereby capital-intensive business models. This is less of a problem for established technologies with low risks. However, raising large amounts of money for unproven technologies and novel business models is a struggle, especially for first-time founders and teams with a strong tech background but lack of business and policy expertise.

To give you an example, suppose you are a startup that wants to build the next generation electrolyzer to produce clean hydrogen. In that case, you probably need to raise tens of millions of dollars even to build your first demonstration device. Outside of well-funded research environments, raising sufficient venture capital for such asset-heavy startups is still very hard and may cause much-needed innovations never to take off. While we have seen a slight shift in VC funding and more money flowing into Climate Tech, we are not at the required level yet.

How can we increase the amount of capital invested in Climate Tech startups?

The straightforward answer would be to redirect the funds flowing to non-sustainable activities to Climate Tech by making the former less and the latter more attractive. The former can be done by putting a price tag on emissions, ideally comprehensively across sectors and areas of human activity. We also need to revisit and let go of some of the well-intended incentive schemes that we have put in place in many countries, e.g., subsidizing fossil fuel extraction or commuting via private cars. This will likely cause significant opposition from the affected groups and sometimes faces, at least temporary, trade-offs with other societal goals such as high employment rates.

The latter can be done by making it as easy and rewarding as possible for the brightest and most ambitious people to get educated about, start, or join initiatives that seek to scale Climate Tech solutions worldwide. Industrialized nations responsible for most historical emissions should lead by example and facilitate allocating funds to Climate Tech investments in emerging economies with a potentially higher impact on climate change mitigation.

What Climate Tech startup ideas would you like a founder to pitch you?

As mentioned before, I would love to see more Climate Tech ventures aim for the stars and present bold ideas that could significantly reduce global greenhouse gas emissions. Three topics that come to mind are (1) waste-to-X, (2) clean hydrogen, and (3) energy storage.

Even in the richest countries globally, the amount of waste we produce and how we treat it is still nowhere near where we need to consider our economies sustainable. Waste is linked to climate change because industrial manufacturing of goods is still the largest single source of greenhouse gas emissions. The best idea we have come up with so far is to collect waste and burn it, thereby regaining its energy content. This is not enough. If you look at the waste hierarchy according to the “Lansink’s ladder”, we need to become much better at preventing waste by design, reusing products, recycling the materials, and or recycling the molecules through “waste-to-chemicals” processes. Due to the systematic nature of innovation in this space, I haven’t seen many startups in this field. I would love to see more people taking a stab at this “dirty business” and thinking about how to make money from turning resources in circles.

Clean hydrogen is at a similar stage to wind and solar in the early 2000s. Many key technologies are still emerging, and production costs will only fall once deployment kicks in. But looking at the number of projects being realized between now and 2030, I am convinced that we are seeing the early signs of what could become a hydrogen economy, which is one key pillar of a net-zero world. I haven’t seen too many early-stage companies developing new solutions in this space, so I invite everyone with a great idea to take a chance at a space that is just starting to take off.

Energy storage is a key component of the energy transition. While batteries can resolve a great deal of the short-term intermittency issues of solar and wind, an enormous challenge lies in the medium (days) and long-term (weeks to months) energy storage. Future carbon-free power grids should be able to account for seasonality in energy production and balance the grid with energy storage. Hence, I would love to see more startups tackling the long-term storage problem.

If you liked this article, share it with your network and inspire more people to learn about science-based climate solutions and startups!💚