The second wave of domestication 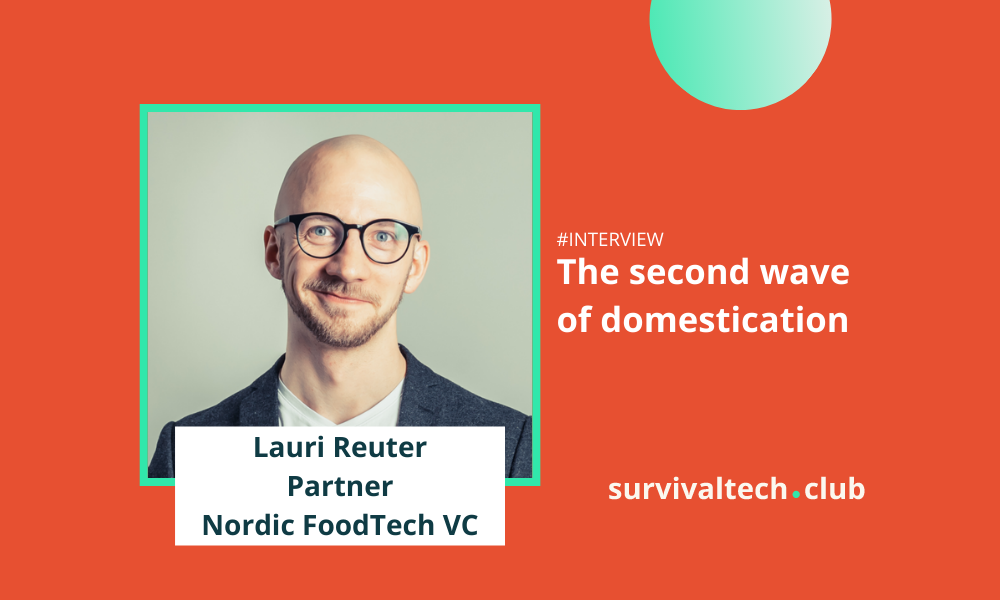 Good to see you again! The past weeks have been filled with work (and some rock-climbing!).

I just finished a project about biomass feedstocks for Carbo Culture, an amazing carbon removal startup. Carbo Culture is turning waste biomass into biochar. If you are not yet familiar what Carbo Culture is building, I highly recommend checking them out!

Also, I’ve been working on the next deep dive on microbes. I warn you; microbes are damn awesome! Stay tuned for the deep dive.

Today, I am excited to share with you the interview with Lauri Reuter, Partner at Nordic FoodTech VC!

Lauri has a background as a scientist and holds a Ph.D. in biotechnology. Currently, he invests in the latest food innovation in the Nordics and Baltics at Nordic FoodTech VC.

Nordic FoodTech VC is the first VC fund in the Nordics that invests specifically in the future of food. They invest in early-stage Nordic and Baltic startups that are transforming the global food system.

Nordic FoodTech VC has just closed its first fund at €42M and has so far made six investments.

For example, Melt&Marble, a Swedish startup, is engineering yeast cells to produce animal fats and thereby making plant-based foods tasty. EniferBio, a Finnish startup, is turning the side streams of biorefineries into high-quality proteins.

How did you turn from a biotech scientist into an investor?

My background is in science, more specifically in biotechnology. I wrapped up my doctoral thesis on precision fermentation using plant cell cultures in 2016.

In 2017, I was still working in the laboratory at VTT, the Finnish state-owned research institution. However, I was starting to evolve a feeling of restlessness. I got irritated that there were lots of solutions not yet put in actual use.

I switched to the strategy team at VTT to figure out how to get more solutions and impact from the research.

During the next few years, we built a research program that started by looking at problems and figuring out solutions to them - not the other way round. Also, we seeded the idea of the VTT Launchpad -accelerator that enables researchers to focus on building a company.

After these accomplishments, it felt like it was time for me to move forward. So around 2018/2019, we started to build the Nordic FoodTech VC, the first Nordic food innovation-focused fund.

What is the importance of science-based startups?

One shouldn’t wait for a university, research group, or corporation to do anything radical.

Scientific research is focused on building up more knowledge and getting new scientific articles published. Corporations, on the other hand, are really good at making incremental improvements. It is very unusual for a corporation to change its business model completely and do something radically new.

The role of technology startups is to take the risk and bring those radical innovations to the market.

In what ways could we get more science-based companies out of the labs?

1. Change the perception of a scientist’s career path

The change has to start from rethinking the education system of scientists.

Entrepreneurship is not currently recognized well enough as a scientist’s career path. There’s only one “correct” academic path which starts by doing a Ph.D. and then a postdoc after a postdoc. Later you hopefully lead your research team and hold a professorship at a university.

Those who leave the academic world and work for the industry might even be viewed as failures, not to mention founding your own startup.

This negative perception of the industry and entrepreneurship among scientists is true especially in Finland. However, the mindset is different in the United States for example, where it is more common to find a professor also running a company.

2. Foster collaboration between universities and the industry

We need more collaboration between the universities and the industry to identify the real problems.

The stereotype that researchers live in their bubbles is far too accurate. To simplify, scientists are great at showcasing solutions but lack the real-world problem these solutions would solve.

Now that vertical farming is so cool, I often talk with scientists developing technologies for urban plant factories. Way too often these brilliant minds have never been in a modern greenhouse nor talked to a farmer. The perspectives might be very technology-focused and lack context.

What are the greatest challenges for science-based startup founders?

1. Turning a research project into a company

The first challenge arises when a research project is turned into a company.

It is a jump into a completely another world for the researchers. You suddenly have to think about things like the shareholder agreement and growing the company.

Furthermore, the type of financing is different for a research project than for a startup. Most researchers are used to having multi-million EU grants that allow them a lot of freedom in research.

The challenge is in understanding that the VC money works in a different way. Your investors will have expectations and the money that you get comes with a high interest (equity). Then again, there is plenty of capital available!

The second challenge typically arises upon the first hire.

The first person to join from outside the founding team is a person who usually has a business background. The team must learn how to communicate with each other despite differing backgrounds and perspectives.

I see that my background as a scientist helps tremendously in supporting research-based founding teams. I understand where these challenges arise and try to help accordingly. I would love to see more investors in VC that have a scientific background.

How do you see the upcoming advancements in biotechnology?

The near future of biotechnology, in food especially, is exciting!

The first wave of domestication happened 10,000 years ago when humankind learned to use plants and animals to produce our food rather than hunting and gathering them.

The second wave of domestication is happening right now. We no longer need tools that are the size of a cow to make our food. Instead, we can engineer microbes like yeast and bacteria to produce our food more efficiently and sustainably.

There are already great examples of this new way of food production on the market. For example, Perfect Day uses microflora to make animal-free dairy products. They just raised $350M and are preparing for an IPO. By now, the dairy industry should start comprehending that having cows turn lignocellulose into milk proteins is already a bit outdated.

Another example is Impossible Foods. They are producing heme at scale with the help of yeast cells. Heme is the iron-containing molecule that makes meat have its distinctive meaty flavor.

All this is just a start.

If you are interested in learning more about food innovation and the food tech industry, check out the “Can you eat this”-documentary series starred by Lauri Reuter and Henri Alén. The documentary is in Finnish and is unfortunately only available with Swedish subtitles at the moment.

Thank you for reading Survivaltech.club! As always, my inbox (pauliina@survivaltech.club) and Twitter DMs (@MeskanenP, @Survivaltechnow) are open for comments and feedback. I love connecting with other minds who are tackling climate change and biodiversity loss!