How can hydrogen be a climate solution? 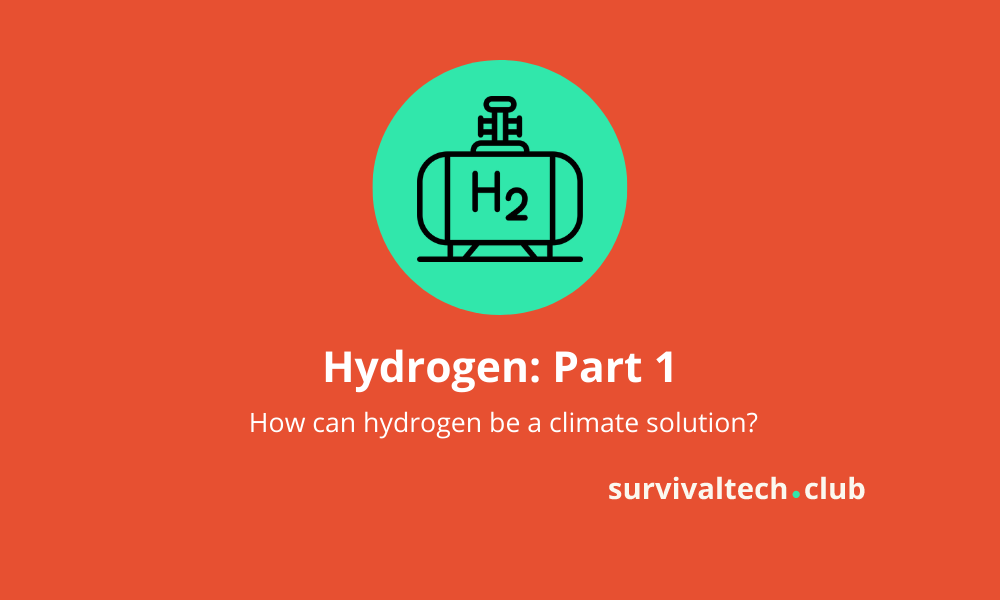 The next deep dive series is here! It’s on hydrogen.

In this Part 1, we’ll go through the basics of hydrogen as a molecule, its current and future use cases, and production methods. Lastly, we consider why green hydrogen is the way to go and why hydrogen leakages must be minimized.

Hydrogen is the lightest known element.

Hydrogen is also the most abundant element in the universe. In fact, a whopping 90% of the universe’s atoms are hydrogen. Most of the stars are fueled by hydrogen via nuclear fusion.

If you are interested in learning about the role of hydrogen in the universe’s formation, I highly recommend this article by astrophysicist Ethan Siegel.

Hydrogen has a central role in our human biology as well. Two-thirds of the atoms in our bodies are hydrogen. And it plays literally a vital role. For example, both water, which makes up 60% of our body mass, and DNA comprise hydrogen.

Hydrogen typically bonds with another hydrogen atom or other elements like oxygen and nitrogen. Hydrogen bonds with other atoms, as it is the most energetically favorable way of existing. More on chemical bonds here.

The current use cases of hydrogen

We, humans, have learned to use this wonder element, hydrogen also in our society.

In 2020, we used 90 Mt (megatons) of hydrogen. Most of this hydrogen was used in oil refining and chemical production.

In oil refining, hydrogen is used to remove impurities like sulfur from the oil and make heavy oil fractions into lighter ones.

In chemical production, hydrogen is used to make ammonia and methanol. Ammonia is an important ingredient for nitrogen fertilizers that feed the world. Methanol, on the other hand, is widely used to make plastics, paints, and pharmaceuticals.

A tiny fraction of hydrogen is also used in iron and steel production in an alternative low-carbon process called the Direct Reduced Iron.

The future use cases of hydrogen

If you have been following the news, you must have noticed that there is a lot of hype around hydrogen.

The US recently launched an $8 billion program for developing clean hydrogen hubs across the country. The European Union and some of its biggest member countries, like Germany and France, have had hydrogen as part of their energy strategies for several years (the hydrogen strategies of the EU, Germany, and France).

Several countries are proponents of hydrogen, as it can help reach their zero-carbon goals.

The growth in hydrogen demand is fueled (pun intended) by the following use cases:

Hydrogen is expected to play an important role in decarbonizing transportation, where batteries can’t do the work. This generally means transportation, which involves high power requirements like trucking, shipping, and aviation.

Hydrogen can be used directly in a fuel cell or combusted.

Alternatively, hydrogen can be converted into hydrogen-based fuels. Most synthetic fuel conversion mechanisms require hydrogen as feedstock. For example, the most common synthetic fuel production process, Fischer-Tropsch, can convert atmospheric/waste CO2 and green hydrogen into fuels like gasoline, diesel, and jet fuel.

Read more about hydrogen’s role as aviation fuel in the Survivaltech.club’s deep dive on aviation.

To learn more about the topic, I highly recommend watching this super informative video by Max Planck Institute for Iron Research.

In the power sector, the main use case for hydrogen would be the seasonal balancing of the electricity grid.

The Department of Energy recently announced a $504M loan guarantee to the world’s largest clean hydrogen and energy storage project in Utah.

Hydrogen seems to have limited use in heating buildings due to cost-efficient alternatives (e.g., heat pumps).

However, hydrogen could play a significant role in decarbonizing industries that require high temperatures in their processes, like cement production, glass making, and aluminum melting.

Hydrogen sounds like a great solution for many challenges! Doesn’t it? But there’s a catch.

Hydrogen is produced from a variety of resources including fossil fuels…

Hydrogen types (based on their production method)

No CO2 is created as a by-product of water electrolysis. More about the electrolysis process and green hydrogen in general in the upcoming Part 2 of this hydrogen deep dive series!

Blue hydrogen is made from fossil fuels like natural gas (methane) and coal. Hydrogen is also created as a by-product of oil refining.

Both of these processes (steam methane reforming and coal gasification) produce CO2.

Blue hydrogen plants are equipped with CCUS units that capture some of the CO2 emissions. Some CO2 is still released into the atmosphere. Furthermore, hydrogen is mostly produced from methane, which easily leaks into the atmosphere and causes strong climate warming (fugitive methane emissions).

Likewise to blue hydrogen, grey hydrogen is produced from natural gas and coal and as a by-product of oil refining.

No CO2 is captured at the end of the process. Methane leakages also contribute to the greenhouse gas emissions of grey hydrogen.

The state of hydrogen production today

Today, almost all hydrogen is grey hydrogen. Hydrogen production was responsible for 900 Mt of CO2 emissions in 2020. That’s as much as the annual CO2 emissions of the UK and Indonesia combined.

A huge ramp-up of hydrogen production has to happen to be able to consider hydrogen as a clean fuel.

When making this ramp-up of annual hydrogen production to 660Mt by 2050, special attention has to be paid to the way of doing this.

Firstly, green hydrogen is the way to go.

Blue hydrogen seems like a great idea due to lower deployment costs and faster ramp-up until you look at its carbon footprint.

A study by Howarth and Jacobson found that blue hydrogen produces only 9-12% fewer emissions than grey hydrogen in terms of CO2-equivalent over a 20-year time frame assuming a 3.5% methane leakage rate and 85% CO2 capture rate.

Secondly, hydrogen leakage has to be minimized.

Hydrogen is an indirect greenhouse gas.

When hydrogen leaks into the atmosphere, it extends the lifetime of methane via a series of chemical reactions. It also leads to the formation of ozone in the troposphere and water vapor in the stratosphere. Both ozone and water vapor are greenhouse gases.

To learn more about these chemical reactions, check out this preprint of a scientific article or this recent article by the Environmental Defense Fund.

Now it’s the time to make sure that we will make hydrogen a climate solution, not another challenge.

“If it’s [hydrogen] produced using renewable energy and water and leak rates are minimal, switching to hydrogen could nearly eliminate the warming impacts from fossil fuels.”

In Part 2 of this deep dive series, we’ll take a look specifically at green hydrogen!

If you liked this article, please share it with your climate friends!🌍