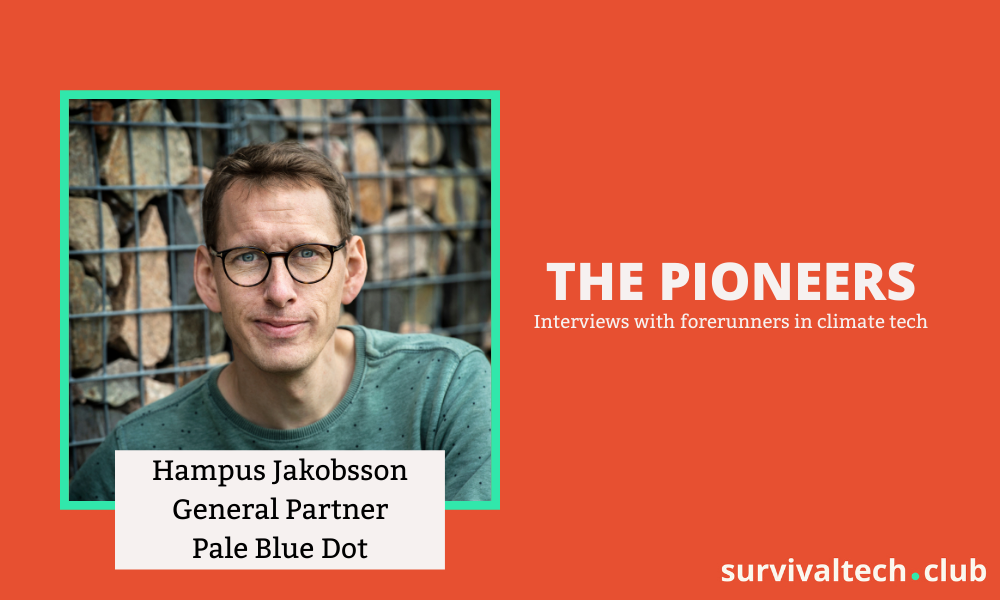 The second interview of The Pioneers-interview series is here!

We chatted about Hampus’ road to climate tech investing, Pale Blue Dot, the kinds of climate startups that he’d like to see more, and the "Climate First" way of looking at the world.

I hope you’ll learn as much as I did. Enjoy!

Pale Blue Dot is a €80M seed-stage venture capital firm investing in climate tech startups that reduce and reverse the climate crisis and help us prepare for a new world.

While Pale Blue Dot is based in Malmö, Sweden, it invests in startups in Europe and the US.

Until today, Pale Blue Dot has invested in 8 climate startups, such as Patch (the platform for negative emissions) and Phytoform Labs (the developer of novel crops with genome editing).

How did you get into investing in climate tech?

I started angel investing around 2010. I had the philosophy that I want to invest in stuff that I want to be built. Investing is like voting with money. Do you want to vote for the evil shit? No. Then don’t put money in that either.

Then I asked myself, would I want to invest in a company that did that? I realized that yes, I would. If this startup could make McDonald's and Starbucks get rid of their plastic lids, that would be great.

The second question that I asked myself was that would I want my kids to go work for this company. Would I encourage them to apply or try to convince them to apply to another company?

As an angel investor, I invested in 104 companies across sectors like femtech, climate, telemedicine, and more broadly ESG type of companies. Furthermore, I invested a lot in companies that I felt nobody was funding. This also applied to companies with female CEOs.

The realization of thoughtful venture money

Then BlueYard approached me. They were starting a VC fund in Berlin.

Initially, I didn’t want to work in venture capital. It feels like venture funds are investing in all the dudes doing meaningless stuff because it prints money for people who already have money.

But BlueYard’s approach was different. They didn’t start by going to all the big events and talking to people who moved and talked like Mark Zuckerberg. Instead, they asked questions like “how we could create free and abundant energy?”

BlueYard was a thesis-driven fund. This period re-transformed my mindset and made me realize that you can build a thoughtful venture fund.

At some point, I started reading a lot about climate change and getting super stressed about it.

I essentially had two options. Either I would just stop reading the news (that’s what I did when Trump became president), or I would jump both feet in and spend all my time with climate.

I chose the second option. That’s when I knew I wanted to leave Blue Yard and start a fund. Then, I met my co-founders Heidi and Joel and started talking.

What kind of climate companies are you investing in at Pale Blue Dot?

There are three things that we look at when investing in a startup:

1. Is the startup a fit for a venture fund?

The company should be able to double on what it is doing in the next 12 months, if we were to throw in single-digit millions.

If a company needs an enormous amount of capital expenditure to build factories, what will the company do with a million from us? Or if it’s going to take 20 years for the startup to make it, then how will we make money? [A standard life cycle of a VC fund is 8-12 years.]

2. Is the company working on a big climate problem?

The company must be able to make a dent in the climate. Also, the startup’s revenue should be tied hip to hip to climate.

If the company is saying that they are working with regenerative agriculture and non-animal food products by making vegan crackers, then... Well, crackers are not exactly one of the world’s greatest problems.

3. Is one of us (Heidi, Joel, or I) super excited about the company?

One of us has to feel the sparks and want to support the company.

Our team members have different ways to make investment decisions. For example, Heidi has a very values-driven approach. She wants the people to be the kind of people she loves and wants to support.

My brain is triggered by novelty. So if I understand exactly what the startup will build and I know what they're going to do for the next five years, I don't get excited unless the people are super exciting.

Sometimes we end up with a situation similar to a dating problem. The Prince Charming is standing right in front of you, but you still don’t want to marry him or her because you are not feeling it.

You mentioned that waiting for 20 years for the startup to “make it” is too long for a venture fund. Are you operating with a normal VC fund life cycle while being a climate fund?

We're like a completely normal vanilla VC fund. If you look at our Limited Partnership Agreement (LPA), it’s hard to spot that we are a climate fund. I think the word climate is mentioned, but that's about it. [What’s a Limited Partner? Read more here.]

When planning the fund, we wanted to play like an extremely normal VC fund. In that way, we could raise the most capital and deploy it the easiest way.

If we had gone out to raise an evergreen fund with a climate focus, we would have probably raised only €10M.

What problems would you like to see that more climate tech startups were to tackle?

The world needs more startups to solve complex problems in climate. In these problem spaces, tech, incentive, behavior, and policy are off. The tech is not there yet, people’s behavior is not there yet, the policies are against you, and the financing isn’t there.

Let me give you three examples of complex problem spaces in climate:

We’ve invested in a startup, which is very, very borderline GMO. They design crops for more sustainable agriculture from scratch.

Both climate people and non-climate people are very afraid of GMO. I would say 20-30% of our investors are not super pleased that we invested. However, we think that the way they’re doing it is responsible.

Trillions and trillions of money have to be directed into green pension funds and sovereign wealth funds.

In green finance, you need people from both climate and finance to cooperate. One person needs to be happy to burn down bridges and start new stuff. Another person, on the other hand, needs to comprehend how a pension fund works and which regulations apply to it.

Usually, this discussion between climate and finance people is full of heated feelings.

We as humanity have built a wrongful incentive system to pay people to plant trees. And we all believe planting trees is good, even though it is not as good as we think  for the climate.

Because of the built incentives, people cut down trees to plant new trees.

This reminds me of the Cobra effect that took place in India in the 19th century. The government wanted to get rid of cobras, so they started paying per cobra head. Soon, people started breeding cobras in their basements. The number of cobras increased by placing the incentive.

What we really should be doing is preserving forests and lands. But nobody gets paid for preserving. Instead, they get paid for doing bad for the climate.

What would you like current and future climate tech founders to know?

I'm a big proponent of what I call “Climate First.”

See, there was a time that when you wanted to book a hotel or hail a taxi, you’d open your laptop to do it. Doing so with your mobile phone just wasn’t an option.

The mobile first companies realized that they could know where the person is, have access to the camera and the contact book, and maybe also payments. The smaller screen size didn't constrain them. Today, 80% of the use cases for an average person are actually 100 times better on a mobile phone than they're on a desktop.

Likewise, we will have climate first founders. They will think of the underlying problem that should be solved. An incumbent will consider developing more sustainable paper straws as irritating. The straws have to be quickly biodegradable, but only after the first 24 hours. A climate first founder will ask herself: “Why are people using straws?”.

Think about what is it that people want and start from there.

I hope you learnt as much as I did when chatting with Hampus! See you again next Thursday!

If you are not yet a subscriber, click below and join the crew to learn weekly about science-based climate solutions and climate startups!