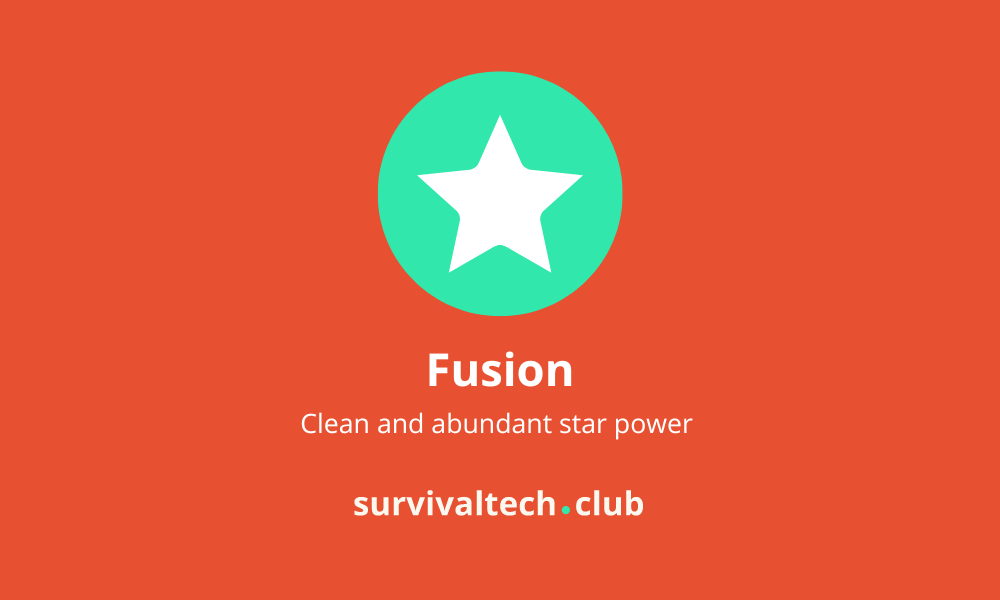 Fusion is considered the holy grail of clean and abundant energy.

A fusion reaction produces nearly four million times more energy than burning fossil fuels (at equal mass). Think about this: one train car of fusion fuel could fulfill the energy needs of the US for a whole year! Fusion fuel is also available. One of the most common fusion fuels, deuterium (a type of hydrogen), is found in seawater.

Oh, and the best part of fusion: it doesn’t emit any greenhouse gases!

Last month, I attended the MIT Technology Review’s Climate Tech conference in Boston. This was a phenomenal conference with top-notch speakers and awesome climate people. Stay tuned for the 2023 conference!

One of the incredible speakers was Anne White, Head of Nuclear Science and Engineering at MIT. Her presentation about fusion filled me with excitement.

I was amazed to hear about the scientific advances researchers were making in fusion. And not only researchers. Many private companies (at least +30) worldwide are working to commercialize fusion.

Anne painted a future where fusion energy might be much closer than we think. The momentum of fusion power is growing.

🌟 The momentum for star power

Several factors are contributing to the growing momentum around fusion.

While humanity has never got a net gain from a fusion reactor, we might be approaching the magical Q=1 moment (getting as much energy out of the fusion reactor as we put in).

As these major technical breakthroughs have unfolded, private funding has started flowing into fusion companies.

Some of the most recent funding rounds for fusion startups are here.

We have an increasing number of private companies working to commercialize fusion. There are now +30 fusion startups, if not +50. As we will learn later, it is exciting how many different approaches these startups are taking toward fusion!

Note: I find it interesting that most fusion startups are located in the US. Being a European, this is a bit sad, but unfortunately, not surprising to me.

⚛️ What is fusion?

In a fusion reaction, two lighter nuclei merge into a heavier nucleus. As a result, a lot of energy is released.

For two nuclei to fuse, they need a lot of energy to overcome the force keeping them away from each other (the electromagnetic force).

In the Sun and other stars, where fusion reactions take place, energy is no problem. The Sun has a temperature of 15 million °C at its core and has a huge gravitational force due to its mass (333,000x of the Earth), sustaining the fusion reactions.

To harness fusion power on Earth, we must create controllable Sun-like conditions here.

There are three main conditions for a fusion reaction to occur:

As noted in the previous section, two nuclei need a lot of energy to overcome the repelling electromagnetic force and fuse together. This is achieved by heating the atoms (usually hydrogen isotopes), giving them a lot of kinetic energy.

Most fusion technologies need to reach temperatures of 150 million °C. The high temperature will turn the atoms into plasma (the fourth state of matter, among solid, liquid, and gas). In plasma, electrons get ripped away from the atoms forming ionized gas (electrons and positively charged nuclei), allowing the nuclei to collide and fuse.

The plasma density must be right to achieve a suitable fusion reaction rate. The density depends on the approach to fusion (e.g., magnetic confinement, inertial confinement. Read more below!).

The particles of the plasma (electrons and positively charged nuclei) must be kept close to each other for the fusion reactions to occur. Again, depending on the approach to fusion, the confinement time differs.

We can achieve these three conditions via a variety of fusion technologies.

It is incredible to see how many different approaches startups take. Below you can see a graph of approaches fusion companies pursue.

The two most common general approaches for fusion are magnetic confinement and inertial confinement.

Magnetic confinement uses magnetic fields to confine the plasma inside the reactor.

The most widely researched magnetic confinement fusion reactor is the tokamak. JET, ITER, and Commonwealth Fusion Systems are building tokamaks.

Other magnetic fusion approaches include stellarator and Z-pinch. Type One Energy and Renaissance Fusion are building stellarators, while Zap Energy is making a Z-pinch fusion reactor.

An inertial confinement fusion reactor compresses and heats a small amount of fusion fuel to initiate the fusion reaction. Most projects use lasers to achieve this.

I’m excited to keep following the developments in fusion. This is not a moonshot, this is a starshot🌟

Special thanks to Greg De Temmerman, Managing Direct at Zenon Research and ex-fusion physicist, for giving me invaluable feedback on this article!

I’d love to hear feedback and connect with fellow climate people! Contact me at pauliina@survivaltech.club or on Twitter.

➡️If you liked this article, share it with your network!🌍💚Share