Interview with Allison Dring, Co-Founder and CEO of Made of Air #16 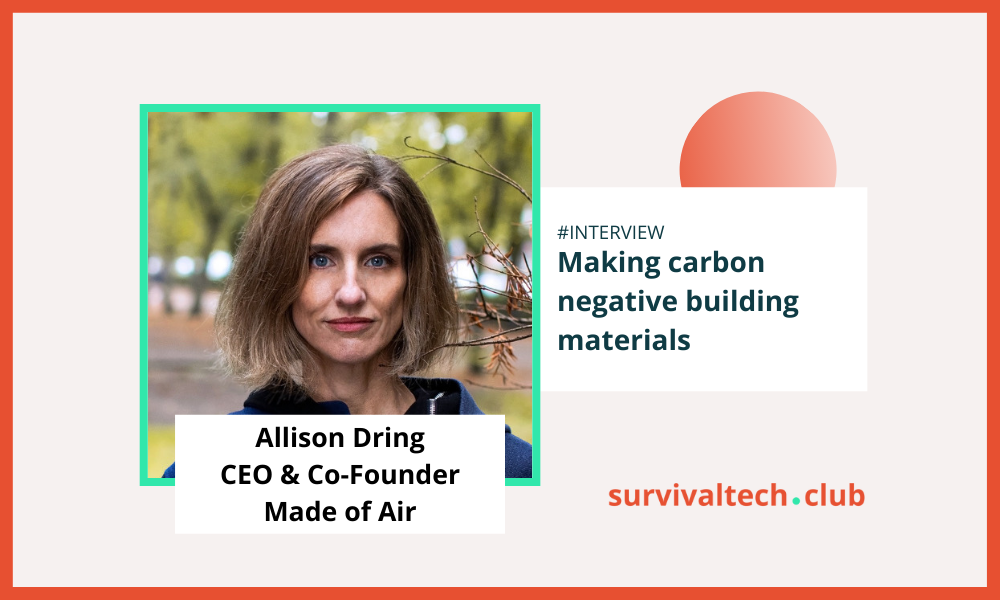 This week, it’s my very pleasure to introduce you to the amazing Allison Dring, Co-Founder and CEO of Made of Air.

Made of Air is a Berlin-based materials and carbon removal company. Their biochar-based material is carbon negative. Each ton of Made of Air’s material produced removes two tons of CO2 from the atmosphere. I find this fascinating!

We discussed with Allison, for example, the founding story of Made of Air, their approach to market entry and material manufacturing, and their experiences from several accelerator programs in Europe and the US.

Introducing Made of Air

🌍 The problems that Made of Air is tackling

Firstly, our humankind needs to deal with scaling carbon dioxide removal. We have already put so much greenhouse gases into the atmosphere that we need to start removing them - while slashing new emissions.

According to the UN Environment Programme (UNEP), our humankind needs to yearly remove 10 Gigatons of CO2 by 2050 and then ramp up to 20Gt of CO2 by 2100 to limit the warming below 2℃. For 1.5℃, the scale would be significantly larger.

Check out my previous deep dive into carbon dioxide removal “The Rise of Carbon Dioxide Removal #5” if you want to learn more about this hot topic!

Secondly, our humankind needs to deal with fast population growth. By 2050 there will be almost 10 billion Homo Sapiens-representatives roaming on this planet Earth. We will need to build many new homes for this new population.

✔️ Made of Air’s solution

Made of Air is a Berlin-based carbon removal and materials startup. It produces carbon negative materials for manufacturing and construction.

When something is carbon negative it means that producing it removes more CO2 from the atmosphere than it produces! So, for example, for every ton of Made of Air’s material produced, 2 tons of carbon dioxide get removed from the atmosphere.

Made Of Air’s material can be used as an alternative to thermoplastics and mined materials in buildings. For example, Made of Air provided the facade panels to the carmaker Audi flagship store in Munich, Germany.

Biochar - the carbon negative technology behind Made of Air

Made of Air uses a technology called biochar to achieve their materials’ negative emissions.

Biochar is a carbon-rich, black material. It is made by baking biomass (like trees, plants, and any organic matter) without oxygen. This process turns the biomass into a stable form that withholds the carbon for thousands of years and prevents it from leaking to the atmosphere.

This process of heating organic matter in the absence of oxygen is called pyrolysis. If you’re interested to learn about the process in more detail, I recommend watching the following YouTube video:

Biochar has a crucial role indeed to play in the mitigation of climate change. A study published in Nature in 2018 estimated that biochar holds the potential to remove 300-200 Mt CO2 / per year before 2050.

What’s the founding story of Made of Air?

My background is in the built environment, and I am an architect by education. After grad school, I jumped right into a company that made air-pollution reducing building products.

That company produced a facade panel that could “eat” pollutants (e.g. NOx) from the air and so, make the air in cities cleaner. This panel used photocatalytic technology.

We aimed to turn buildings into an act of good for the environment. However, what was shocking to us was that we still couldn't make the facade panel without generating tons and tons of fossil plastics.

We started thinking systemically, going back in the value chains of manufacturing products. Why are we globally depending on fossil resources to make our stuff? Especially, when we know that we will need to make more stuff with our population increase, not less.

We understood that we should utilize this massive growth of population and built environment as an opportunity to solve climate change. That’s when we came up with the carbon removal strategy and started looking into biochar.

The great thing about biochar is that it can be embedded in different materials. We began prototyping with different compositions. Finally, after five years of prototyping, we incorporated Made of Air.

How have you approached getting your product to the market?

What's been the most successful for us has been keeping our eyes on the problem. We went out to the market and saw the problems very clearly.

While the price has been driving the economy for a long time, we now see new drivers entering the market - environmental performance being one of them.

Some consumer brands are starting to set internal sustainability goals and to count their carbon footprints. Furthermore, there is increasing regulatory pressure, especially in the EU.

We have large consumer brands, corporations, and manufacturing industries that want to switch away from fossil resources. They want to tackle the problem and not just buy offsets and call it a day. However, these organizations are unsure how to go about this systemic problem and lack alternatives to fossil-based materials.

In our conversations with potential customers, we work down into their supply chains. For example, if it’s a car company, we discuss their tier one, two and three suppliers. We try to understand how they are sourcing materials and what will incentivize them to change.

Where and how are you producing your material?

We are currently taking over a lot of the steps in the production that our partners have previously done.

In the beginning, we relied on partners to build the supply chain and to understand how those processes work. Now, we want to focus on ensuring the quality and scale to work with bigger customers.

We are based in Berlin, Germany, and are starting to build up our production facility here in the region.

Made of Air has participated in several accelerators. What has been the biggest advantage of these programs for you?

We've been extremely fortunate to have worked in several accelerators for the past 12 months. First, we did the BMW Foundation's RESPOND and then went into Elemental Excelerator. We are now participating in the Carbon to Value (C2V) Initiative.

Each one of these programs offers advice to some section of our business. I appreciated the personal way these programs supported us. They have been very tailored, and there are many independent, highly-skilled mentors involved.

I’d like to highlight something special in Elemental’s philosophy. There they see your company also as a platform for social change. It is crucial that the company also practices equitable behavior.

How should we think about sustainable buildings and materials in the future?

For me, the future of materials is going to be carbon storing. When building cities, we talk about permanent structures with a lifetime of 30, 50, or 100 years. If you think about that, they are parallel to the life of a tree. A tree is a carbon sink, so why can’t a building also be a carbon sink?

I find wood building also exciting. There have been a lot of studies about how timber buildings can be used as a carbon sink. You can even take a certain portion of wood out of the forest, put it in use in cities, and not harm the forest as a carbon sink.

It will take a real shake-up in the way we think about construction and the permanence, recyclability, and the origin of materials. It’s not simple, but we are in a crisis. It is not about step change anymore. It is about systemic reversal.

What’s the role of entrepreneurship in achieving the necessary systemic change?

From my experience, I would say that entrepreneurship is one of the only ways I think we will get it done.

The climate crisis is an incredibly complex and diverse problem. To solve the challenge, we have to meet it with complexity and diversity on our side.

I don’t have a chemistry background. I come from the built environment and am a trained architect. Nevertheless, I am leading a materials and carbon removal company. I never stayed in my lane, and neither has anyone in our team.

Entrepreneurs also tend to have the sufficient level of stubbornness to make things happen.

What are your best ways of learning?

I'm learning every minute of every day.

I don't have any particular sources. Instead, I have a practice of staying curious.

We all think we know more than we do. Sometimes, we’re pushed into a corner to be an expert when we are unsure if we are. So my learning is to resist that and actually to try to unlearn as much as I can.

Also, I’m surrounded by very very knowledgeable people. A good example of that is the C2V -initiative that we’re in right now. The level of information, the level of thinking, and the fact that we can cross-pollinate our ideas with the others is exhilarating.

Until next week, fellow human!